An alchemist in his laboratory. Oil painting after David Teniers II. 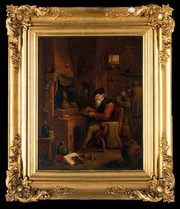 Composition described thus by Smith, loc. cit.: "A chemist's laboratory. The operator (an old man with a grey beard, seated in an armchair) is blowing the fire under a retort; in the back of the room is a man standing, with a bottle in his hand, another is seated, beating something in a mortar; these are overlooked by a man from a little window above. Three books and three crucibles lie on the ground, in front; and a variety of chemical apparatus are about the place. 1 ft 2 in. by 10 3/4 in. Engraved by Major." In this version, the alchemist is seated looking towards the viewer's left, as in the engraving by T. Major, 1750, dedicated to Dr Richard Mead. In some other versions, the alchemist is seated looking towards the viewer's right