The prophecy of Masuka: an African medicine man or shaman of the Nkose watching the future in a bowl. Painting by Stanley Wood, 1894. 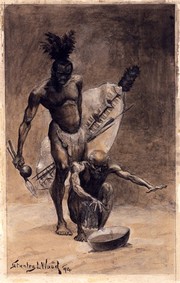 The design for an illustration in the book The King's assegai: a Matabili story, by Bertram Mitford, London: Chatto & Windus, 1894. The illustration appears in the chapter "The Prophecy of Masuka". It celebrates the strength and courage of the Nkose tribe, a band of warriors who are afraid of nothing but magic. The powers of Masuka the witchdoctor, shown as the crouching figure in the illustration, are spoken of by the warrior shown standing behind him thus: 'I was very much confused for the old wizard seemed to divine the deepest secrets of men's hearts' (p. 127). The caption for the illustration is part of a passage describing magic and prediction: 'I approached, and peered cautiously over his shoulder for he was seated with his back towards me. The thing in front of him was a bowl, even as I had thought. In it was a strange liquid which shone and shimmered in the half-darkness of the hut. As I looked into this something moved and I cried out in amazement, for it was as if a man was looking through the circle of his hands in the strange world beyond. There were towerering cliffs and rugged stone-strewn slopes, and up these slopes surged a dense swarm of beings like ants - they were men. Then it seemed that mountains seemed to crack and split and all went into space... A man stood among men, and an assegai was descending to his chest, but I do not know who held the assegai. Then I saw his face-it was my brother. I had looked into strange and terrifying mysteries, and was ever consumed by a longing to look once more into them...'(pp 129-133).

The prophecy of Masuka: an African medicine man or shaman of the Nkose watching the future in a bowl. Painting by Stanley Wood, 1894. Credit: Wellcome Collection. CC BY