Ernst Haeckel being tormented by Prussian cherubim who confront his work on the natural history of creation with the Almanach de Gotha. Drawing attributed to Max Hagen. 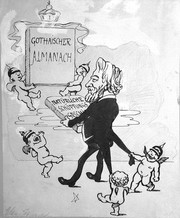 Credit: Ernst Haeckel being tormented by Prussian cherubim who confront his work on the natural history of creation with the Almanach de Gotha. Drawing attributed to Max Hagen. Credit: Wellcome Collection. Attribution 4.0 International (CC BY 4.0)

Haeckel, centre, holds out a big book inscribed "Natürliche Schöpfungsgeschichte", which is confronted by an even bigger volume inscribed "Gothaischer Almanach", held by two cherubim wearing Prussian helmets. In the foreground three other cherubim torment him Haeckel published aggressive and controversial statements on evolution, treating political and religious matters from a viewpoint derived from "social Darwinism" (see Dictionary of scientific biography, s.v. Haeckel). His popular book Natuerliche Schoepfungsgeschichte: gemeinverstaendliche wissenschaftliche Vortraege ueber die Entwickelungslehre im Allgemeinem und diejenige von Darwin, Goethe, und Lamarck im Besonderen, was first published in Berlin in 1868, and subsequently went through many other editions. The author scorned the aristocracy: "What must these members of the nobility think about that blue blood that rolls through those privileged arteries when they learn that all human embryos, noble as well as middle class, during the first two months of development, can hardly be distinguished from the tailed embryos of a dog or other mammals?" (TLS, 25 July 2008, p. 12)

Attribution to Hagen from name inscribed on old mount. Hagen worked in Munich and drew illustrations for the magazine Jeunesse