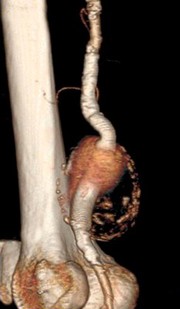 This 3D reconstructed CT image shows the posterior view of a popliteal aneurysm in the leg of an 84-year-old male patient. The femur, or thigh bone, is shown on the left of the image, with the popliteal artery running down the middle, which extends from the lower thigh to upper calf. The aneurysm is shown centre frame, with a reddish-blue appearance and eggshell-like boundary. An aneurysm is a localised swelling of an artery, presenting itself as a balloon-like bulge. Aneurysms are commonly found in the abdominal vessels (abdominal aortic aneurysms, AAAs) and leg vessels, as shown here. Unruptured aneurysms do not usually display symptoms, but if ruptured, 75 per cent of patients do not survive. This mortality rate drops to below 5 per cent when treated by vascular surgeons. An aneurysm at risk of rupture can be treated to divert its blood flow; the aneurysm in this image is just over 6 cm and has had a stent-graft fitted. Stents are small wire frames supporting both artery and graft, which divert the flow of blood. This procedure is known as popliteal endovascular aneurysm repair (PEVAR). 2011 Wellcome Image Award winner. Wellcome Image Awards 2011.