'Philijpÿn' helps a donkey to vomit while a 'Doctor Financier' examines a urine sample;; representing the state of Spain under the monarchy of King Philip V. Etching attributed to A. Allard, 1711. 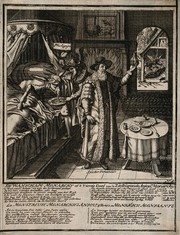 Credit: 'Philijpÿn' helps a donkey to vomit while a 'Doctor Financier' examines a urine sample;; representing the state of Spain under the monarchy of King Philip V. Etching attributed to A. Allard, 1711. Credit: Wellcome Collection. Attribution 4.0 International (CC BY 4.0)

The composition is derived from an earlier engraving by Theodore Galle, but for these details: the earlier shows clouds through the door, not a landscape; the food on the plates is more substantial; there is no painting above the furnace of a cat or dog drinking from a barrel; and the costumes are religious, not secular. The labels on each figure have been erased, except for that of the man aiding the vomiting donkey, which has been replaced with 'Philijpÿn'. In the Galle print, the donkey is labelled 'caro', the man with the donkey 'homo carnalis', and the sleeping woman being attacked by an incubic devil, 'anima'. It is accompanied by a verse: Si caro pallentis sentit fera spicula morbi/ Mox ut opem properata ferat medicina paratur/ Ast anima raros tangit pia cura medendi/ Peste laborantis, metuendaque fata timentis. On this earlier version, see E. Holländer, Die Karikatur und Satire in der Medizin; 2nd ed., Stuttgart: Ferdinand Enke, 1921 According to Muller, the donkey or ass represents Spain, and Phiippijn stands for King Philip V of Spain, formerly Duke of Anjou. The lettering seems to suggest that the 'Doctor Financier' represents France, from whom Philippijn is requesting financial support. In the background a devil descends like an incubus on a sleeping woman, apparently meant to represent unjust war

Not found in: British Museum, Catalogue of political and personal satires

Attributed in the online catalogue of the Rijksmuseum to Abraham Allard