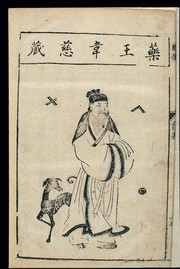 One of a series of woodcuts of illustrious physicians and legendary founders of Chinese medicine from an edition of Bencao mengquan (Introduction to the Pharmacopoeia), engraved in the Wanli reign period of the Ming dynasty (1573-1620) -- Volume preface, 'Lidai mingyi hua xingshi' (Portraits and names of famous doctors through history). The images are attributed to a Tang (618-907) creator, Gan Bozong. The account in 'Portraits and Names of Famous Doctors through History' states: Yaowang (the Medicine King) had the surname Wei and the given name Xun. His Daoist name was Cicang (storehouse of kindness). He was an Imperial Physician at the Tang (618-907) Court. He often went out walking accompanied by a black dog, dispensing medicines to help the sick. He was highly regarded by the Tang emperor Xuanzong, who bestowed the title 'Medicine King' on him. Later physicians often kept images of him, to which they offered sacrifices.