A baroque sculpture forming an allegory of dentifrice at the entrance to an international toothpowder exhibition. Drawing by A. Oberländer, ca. 1900. 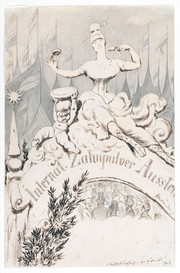 Credit: A baroque sculpture forming an allegory of dentifrice at the entrance to an international toothpowder exhibition. Drawing by A. Oberländer, ca. 1900. Credit: Wellcome Collection. Attribution 4.0 International (CC BY 4.0)

A fantasy, showing the entrance to a grand international exhibition on toothpowder, marked by an arch containing an allegorical statue: a woman in modern dress raises with one hand a box of toothpowder from a bowl held by a putto, while holding a loaded toothbrush in the other hand. She is tightly corseted. A throng of people passes beneath the arch. Beyond, pavilions flying flags. A satire on grandiose neo-baroque buildings such as the World's Columbian Exposition in Chicago (1893) and the Grand Palais in Paris (1900), which were used to display trade fairs of humble household or industrial goods. The Munich Messehallen, built in 1907-1908, eschewed such decorations, which had by then become old-fashioned, as shown by this satire