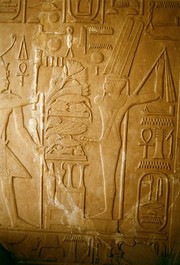 Min, Egyptian god of fertility. He was invoked for animal. vegetable and human fertility. He is represented in human form with legs placed close thogether like those of a mummy and an erect phallus. A flail is depicted above his raised arm with its hand extended to one side. He wears a tight scull cap on his head with two lofty plumes and two streamers hanging down the back. Amongst the offerings to Min is a lettuce (pictured just above the tip of the erect phallus) which was considered an aphrodisiac and frequently associated with the god. This wall relief is from Karnak, near Luxor which was known in ancient Egypt as Ipet-isut 'the most select of places'. The temples of Karnak were built, enlarged, demolished, re-built and restored for over 2000 years after the Theban kings and the god Amun came to prominence at the beginning of the Middle Kingdom (2040-1782 BCE). Karnak was particularly active from the beginning of Dynasty XVIII (1570-1293 BCE) when the capital of Egypt was established as Thebes. Photograph taken in 1989.