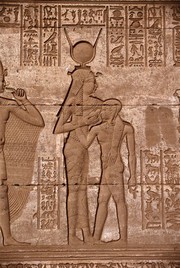 Free to use with attribution Attribution 4.0 International (CC BY 4.0)Credit: Carole Reeves Can I use this?

Goddess Hathor feeding her son Ihy. This wall relief is from the birth house built during the Roman period (30BCE-CE395) at the temple complex of Dendara in Northern Upper Egypt. Within the birth house, Hathor ritually gave birth to the young Ihy who represented the youthful phase of creator gods in general. Dendara was the capital of the 6th nome of Upper Egypt and a town of some importance. The temple complex dates from the period between Dynasty XXX (380-343 BCE0) and the Roman Period (CE 30-395). It was a major cult centre for Hathor, the cow godess represented in human form wearing on her head the sun-disc flanked by a cow's horn. Dendara was on of the oldest centres of worship of Hathor; a temple was first built on the site during the reign of the pharaoh Khaefre (reigned 2558-2504 BCE, Dynasty IV). Since Isis as well as Hathor was worshipped at Dendara (and Edfu), and the two became closely connected at this period (Isis 'adopted' Hathor's head dress of cow's horns and sun disc), some authorities consider this to be a depiction of Isis feeding Horus. Photograph taken in 1989.