Muscles of the abdomen: three écorchés figures. Colour mezzotint by J. F. Gautier d'Agoty after himself, 1745/1746. 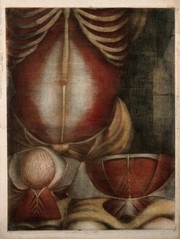 Jacques Fabien Gautier d'Agoty, published a series of anatomy plates using a colour mezzotint process which had first been developed by Jacob Christoph Le Blon (1667-1741), in whose workshop Gautier d'Agoty had served as an assistant. In 1737, Le Blon obtained a copyright to publish a complete colour anatomy atlas, which never appeared. To Le Blon's process, which used the three colours of red, yellow and blue, Gautier d'Agoty added black and claimed the process to be his own invention. The plates are after dissections prepared by J. F. Duverney (d. 1748), a Parisian surgeon and demonstrator of anatomy and surgery at the Jardin du Roy. According to the "Avertisement" the principle aim of the Myologie complette was to "facilitate the study of Anatomy for all sorts of people, above all students of medicine, surgery, painting and sculpture, all of those who, in a word, have the health and study of the human body as their subject."