An alchemist in his laboratory. Oil painting attributed to a Bavarian painter, 18/19th century, after David Teniers the younger. 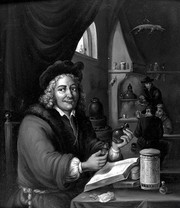 Left, an apothecary or alchemist sits directed to right, facing the viewer. He wears a hat and a red robe which are lined in brown fur. He holds in his left hand a brown flask and in his right a pair of spectacles. To right, in front of him, is a table covered with a blue cloth. On the table are two books, a pill-box(?), a drug-jar (cream with brown line decoration, inscribed BV, possibly followed by another letter), a glass phial, some copper coins, and a white object in a piece of paper. Behind, centre, is a free-standing brazier. Right, two men seated at a table; one of them holds a flask containing a red liquid. Beyond, at the back of the room, is a fire place in which is a still tended by another man. On the back wall, shelves holding flasks. Above, a suspended reptile. Left, a small window high up in the wall

After a composition by David Teniers the younger, of which a version signed and dated 1680, on wood 24 x 19 cm., is in the Bayerische Staatsgemäldesammlungen, Schloss Schleissheim (Klinge, loc. cit., 1991)