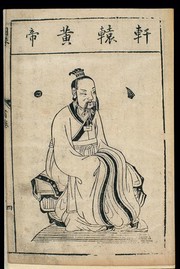 One of a series of woodcuts of illustrious physicians and legendary founders of Chinese medicine from an edition of Bencao mengquan (Introduction to the Pharmacopoeia), engraved in the Wanli reign period of the Ming dynasty (1573-1620) -- Volume preface, 'Lidai mingyi hua xingshi' (Portraits and names of famous doctors through history). The images are attributed to a Tang (618-907) creator, Gan Bozong. The account in 'Portraits and Names of Famous Doctors through History' states: The Yellow Emperor was surnamed Gongsun [Grandfather and Grandson], and his given name was Xuanyuan. The son of the King of Youxiongguo -- the Country that has Bears, he is also known as Youxiong Shi. He became emperor after subduing the wars and violent turmoil at the end of the Divine Farmer's reign. Weapons, boats, the cultivation of silkworms and silk-making, weaving, the calendrical system, Chinese characters, musical modes, mathematics and medicine are all supposed to date from his reign. Huangdi neijing (Inner Canon of the Yellow Emperor) is the earliest extant treatise on medical theory. It contains dialogues between the Yellow Emperor and Qibo. The bibliographic treatise of Houhan shu (History of the Later Han Dynasty) by Ban Gu (32-92 CE) lists other books with titles referring to the Yellow Emperor, e.g. Huangdi waijing (Outer Canon of the Yellow Emperor), Shen Nong Huangdi shiji (Alimentary Prohibitions of the Divine Framer and the Yellow Emperor). Sadly, however, these have not survived.