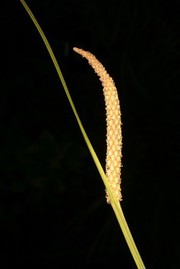 Free to use with attribution CC BYCredit: Dr Henry Oakeley Can I use this?

Acorus gramineus Aiton, Acoraceae. Japanese sweet flag grassy-leaved sweet flag. Rhizomatous perennial. Distribution: E. Himalaya to Japan and Philippines. The cultivar 'Oborozuki' has yellow leaves with green stripes. The rhizomes are aromatic. The European Acorus calumus is used to make a volatile oil which contains ?-asarone as the major component. This is carcinogenic in animal studies and nephrotoxic and epileptogenic. Acorus gramineus is used medicinally throughout Asia and In the Philippines it has the same multiplicity of uses as A. calamus, including treatment of arthritis, lumbago, muscle pains, indigestion toothache, as a tonic, to increase the appetite, haemorrhage, treat intestinal ulceration, used as a sedative, for tinnitus, deafness, poor memory, unconsciousness during a fever, for treating insanity, as an insecticide abscesses and scabies and to protect young children from getting flatus when someone compliments them on their appearance – a condition known as ‘usog’. Photographed in the Medicinal Garden of the Royal College of Physicians, London.