Head of a woman soldier, a member of the ATS (Auxiliary Territorial Service). Colour lithograph after Abram Games, 1944. 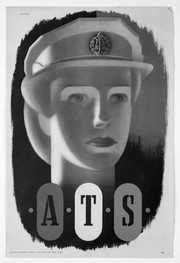 A recruiting poster for the Auxiliary Territorial Service (ATS), which was formed in 1938 and replaced in 1949 by the Women's Royal Army Corps. According to information in the Imperial War Museum, Abram Games was commissioned to produce a recruiting poster for it in about 1938. His first two designs were rejected on the ground that the image presented was too glamorous. The present poster of 1944 shows the third design, which was accepted.

Not in copyright in the UK. Was formerly UK Crown copyright, but that has expired. Letter to the Wellcome Library from the Estate of Abram Games, 24 January 2001