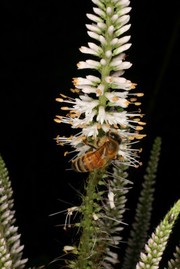 Veronicastrum virginicum (L.)Farw. Scrophulariaceae. Cultivar 'Pink Glow'. Known as Blackroot or Culver's Root. Distribution: North America. Austin (2004) calls it Black-root, also known by its synonym Leptandra virginica. He reports that it was used by Native Americans as a purgative and antiseptic, sudorific, tonic, and that the Cherokee chewed the plant to relieve colic and made it into a tea for backache. The Menomini used it as an emetic, and for purification after being defiled by being touched by a bereaved person). It was used for constipation, kidney stones, ague, to aid weak women and for labour by the Meskwaki. The crushed root was used as cathartic, and to clean scrofula (tuberculous) sores by the Ojibwa and the Seneca. Root bitter and nauseous. Stearns (1801) advises that one teaspoon of 'Culver's root' would induce vomiting, which indicates how toxic it is. The medicine is said to gain its popular name from Dr Culver about whom nothing appears to be known. Olver Wendell Holmes relates in his Medical Essays (1842-1882, p. 152, The Medical Profession in Massachusetts) about Cotton Mather, the early 18th century Calvinist at the heart of the Salem witchcraft trials, writing to John Winthrop of New London in 1716 who ' speaks of it [Culver's Root] as famous for the cure of consumption [tuberculosis], and wishes to get some of it, ... for his daughter Katherine, his eldest daughter. He gets it and gives it to the 'poor damsel' ... who dies the next month, - all the sooner, I have little doubt, for this uncertain and violent drug ...'(referencing Mather Papers in Hist. Coll. 4th Series, viii:420). Photographed in the Medicinal Garden of the Royal College of Physicians, London.