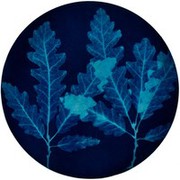 Free to use with attribution CC BYCredit: Ansel Oommen Can I use this?

18th Century photographer and botanist Anna Atkins popularized the use of cyanotype in botany as a means of recording plant specimens. At the core of the cyanotype process are two light sensitive iron compounds, Ferric ammonium citrate and potassium ferricyanide, that react with UV light. When leaves (or other objects) are placed on top of chemically sensitized paper and exposed to sunlight, the iron compounds react to form a blueprint. Areas where the light cannot pass through i.e. covered by the opaque leaf, do not undergo the reaction and are washed off to reveal the colour of the paper underneath. Here, the creator has paired the cyanotype with standard clearing procedures used to study leaf venation and architecture. By rendering the leaf translucent, UV light can pass through and react with the paper underneath. The resulting "combination cyanotype" produces a wider range of blue tonal values, creating a refined aesthetic print that is more scientifically representative of the species depicted, which in this case was the Turkey Oak (Quercus cerris). The Turkey Oak was first introduced into the UK as an ornamental tree, but in 1998 the Ministry of Defence ordered the felling of all Turkey Oaks on its UK bases as it was discovered they were host to the gall wasp Andricus quercuscalicis, whose larvae damage the acorns of native British Oaks.