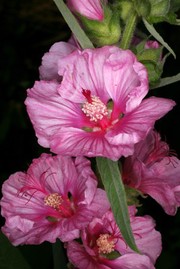 Lavatera olbia L. Malvaceae Tree Mallow 'Pink Frills' Distribution: Southern Europe. Named for Jean Rodolphe Lavater (fl. 1700-08), physician, naturalist and FRS, friend of Tournefort (Oakeley 2012). Lobel (1570) relates, under the name Althaea arborea olbia that it was grown in Morgani hortis Londini [viz. in the garden in Coleman Street London of Hugh Morgan, Apothecary to Queen Elizabeth I]. Gerard (1633) writes that the leaves as a poultice are analgesic and, as a tea, help relieve the pain of renal stones the roots, boiled in water with various other plants are useful for (among much else) clearing up ‘dangerous greene wounds ... it helpeth digestion in them and bringeth old ulcers to maturation’. The marshmallow of confectionery was derived from the root of Althaea officinalis, the marshmallow, but is now made of sugars, corn syrup and gelatin with various flavourings. Photographed in the Medicinal Garden of the Royal College of Physicians, London.