Attributes of dPal-ldan Lha-mo in a "rgyan tshogs" banner. Distemper painting by a Tibetan painter. 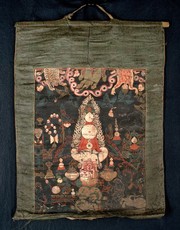 The painting shows the attributes of a Buddhist deity. Among the attributes shown is a peacock's tail, a trident and some entrails held in the bills of flying birds. The former two items would suggest that the banner shows the attributes of dPal-ldan Lha-mo. Were it not for the entrails, the emblems could also belong to Ma-cig-ma (Ma-cig dPal-gyi Lha-mo), another form of Lha-mo, but the attributes of the latter are peaceful ones. An earlier supposition had been that the banner represents Hevajra, since one of his Tibetan epithets, Rol-pa'i-rdo-rje, is mentioned in the inscription on the back. Against this is the fact that Hevajra does not figure among the deities in another set of rgyan tshogs banners (a complete set of fifteen) in the Wellcome Library Along the top, a tiger skin, an elephant skin and a flayed human skin are suspended. The centre is taken up by a giant sacrificial cake (gtor ma) surrounded by a white radiance. There are two detached human heads. To the left of the gtor ma, a flag is surmounted by a fly whisk and a trident, and near it are a blood-filled skull bowl, a butter lamp, a peacock's tail, a garland of eleven skulls, a victorious banner, a double drum, a vajra, a bell, a vīṇā (lute), various substances offered on a low table, a wild man and three antelopes. On the right hand side are the Eight Auspicious Things: a wheel, a conch shell, an umbrella, a victory banner, two fishes, an unending knot, a lotus flower, and a vase. Underneath are a horse, a monkey, two dogs, a tiger, a snow lion, and a pair of queen's earrings. There is also a dbal (fire cone)

Marianne Winder, Catalogue of Tibetan manuscripts and xylographs, and catalogue of thankas, banners and other paintings and drawings in the Library of the Wellcome Institute for the History of Medicine, London 1989, p. 100, thankas banners and paintings no. 43