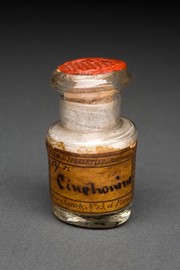 The label on the bottle translates from French as “Produced by J. Pelletier”. In 1820, Pierre-Joseph Pelletier (1788–1842) and Joseph Caventou (1795-1877) discovered and isolated the compound in cinchona bark that made the bark so effective against malaria. They named the compound quinine. Since then improvements in production techniques have given us more effective quinine-based drugs against malaria. maker: Pelletier, Pierre Joseph Place made: Paris, Ville de Paris, Île-de-France, France