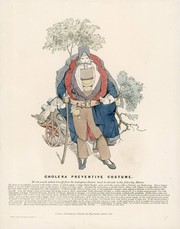 This is black humour in the face of a deadly disease. A cholera epidemic arrived in England in 1831, the first time the disease had reached Britain. Within months, many hundreds had died and when the disease reached London in February 1832 the population was rightly afraid. There was no cure available, but plenty of claims and suggestions were put forward – often by those hoping to make a profit. In this satirical print a man attempts to save himself by wearing and carrying a full range of protective equipment. This includes an acacia tree in his left hand and a juniper bush in his right, while having a branch of acorns near his mouth. He is also pictured with a pitcher of water behind each calf and pockets stuffed with herbs and perfumed tea. The presence of strong smelling items reflects the prevailing belief that the source of disease was foul smelling air – so-called ‘miasmas’. The caption which describes all these methods ends with a warning: “By exactly following these instructions you may be certain that the cholera…will attack you first.” The print was first published in central London in March 1832. When the disease receded a few months later up to seven thousand Londoners had died. Only after a later epidemic in 1854 would John Snow’s researches point to contaminated water being the means by which the disease was spread. publisher: McLean, Thomas, printer: Meifred, Lemercier and Company Place made: London, Greater London, England, United Kingdom