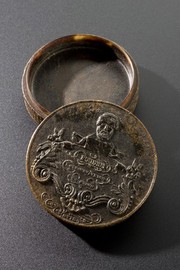 Inscribed with the French word 'Poudre' this tortoiseshell box was used to store powder for the face or hair. Many men and women in the 1700s had their heads shaved to prevent attacks of head lice and remove the need to wash their hair. To cover up the baldness, they wore wigs made from human hair or horsehair, which were stuck on with animal fat. White powder, made from ingredients such flour and clay, were placed on to wigs to give them a fashionable colour. White face powder and paint was also used to cover up scars caused by smallpox. The box was purchased from the private collection of Noel Hamonic (active 1850-1928) by Henry Wellcome in 1928. maker: Unknown maker Place made: Paris, Ville de Paris, Île-de-France, France