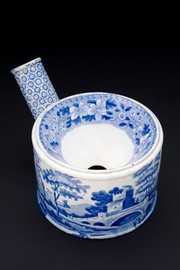 Spitting was a common and socially acceptable habit in Europe until the 1800s. Pottery spittoons like this one were used as containers for spit and could be found both inside and outside of public places, such as inns and public houses. From the late 1800s, spitting was discouraged as it was realised that the habit could spread potentially fatal diseases. These included tuberculosis, or consumption as it was then known, one of the biggest killers of the period. This glazed ceramic spittoon has a blue and white ‘tower’ transfer design and is marked underneath with the maker’s name, Spode. maker: Spode Place made: England, United Kingdom