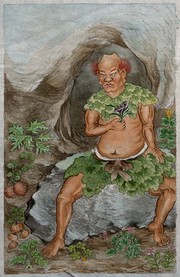 Chinese emperor Shen Nung (Yandi, ca. 2737 B.C.E.), also known as 'The Divine Healer' or 'The Father of Chinese Medicine', was believed to have discovered the medical and therapeutic properties of plants, and also introduced tea to China. He subsequently became the patron of pharmacists and is sometimes depicted wearing clothes fashioned from leaves, as here