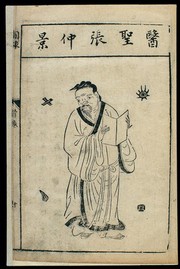 One of a series of woodcuts of illustrious physicians and legendary founders of Chinese medicine from an edition of Bencao mengquan (Introduction to the Pharmacopoeia), engraved in the Wanli reign period of the Ming dynasty (1573-1620) -- Volume preface, 'Lidai mingyi hua xingshi' (Portraits and names of famous doctors through history). The images are attributed to a Tang (618-907) creator, Gan Bozong. The account in 'Portraits and Names of Famous Doctors through History' states: Zhang Ji, styled Zhang Zhongjing, a native of Nanyang, was Prefect of Changsha under the Han Dynasty (206 BCE-220 CE). Building on the foundations of Shen Nong Bencao jing (The Divine Farmer's (The Divine Farmer' s Canon of Materia Medica) and other pre-Han medical works, he wrote Shanghan zabing lun (Treatise on Cold Damage and Various Illnesses), establishing the school of medical theory later known as Zhongjing xueshuo (the Zhongjing school). Though this work no longer exists in its original form, it has been transmitted as edited and reworked by Wang Shuhe in the Jin period (265-420). It came to be regarded as the foundation of the theory of prescribing in Chinese medicine.