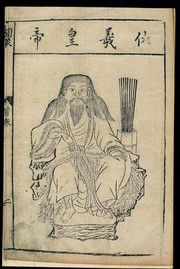 One of a series of woodcuts of illustrious physicians and legendary founders of Chinese medicine from an edition of Bencao mengquan (Introduction to the Pharmacopoeia), engraved in the Wanli reign period of the Ming dynasty (1573-1620) -- Volume preface, 'Lidai mingyi hua xingshi' (Portraits and names of famous doctors through history). The images are attributed to a Tang (618-907) creator, Gan Bozong. The text states: The great heavenly Fuxi was surnamed Feng [Wind]. In remote antiquity, he supplanted Suirenshi (the legendary creator of fire) and became Emperor. His merits and achievements were great: he devised the Eight Trigrams, invented writing, instituted marriage, and taught humankind to catch fish, grow plants and keep animals. According to tradition, he had a snake's body and human head, but he is depicted here as fully human.