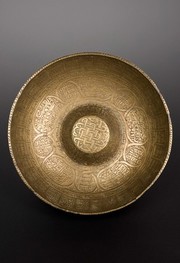 Divination was used in medicine to try to determine the cause of an illness and to give some indication as to suitable treatments. This divination bowl may have been used by interpreting the reflection of light on its sides. Other divination methods include casting stones or studying the entrails of a sacrificed animal and interpreting the patterns made. This brass bowl is engraved with inscriptions using Arabic script. Some of these are from the Qur’an. On the underneath of the bowl there is the Star of David, a six-pointed star connected with the Jewish faith. This mix of Jewish and Muslim religious symbols is not so surprising when we find out that the bowl was purchased in 1935 in Jerusalem, a holy place for Islam, Judaism and Christianity. It is not known where this bowl was made although Persia (modern day Iran) or Palestine in the Middle East seem likely. maker: Unknown maker Place made: Middle East