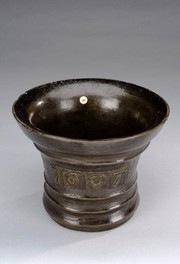 Mortars were used with pestles to crush and grind ingredients for drug preparations which were often in the form of powders, ointments or solutions. The mortar and pestle are both ancient tools, traditionally the most recognisable symbols associated with the pharmaceutical profession. This mortar is made from bell metal, which is a form of bronze. Its bell shape suggests it may have been cast in a bell foundry, which was very common. Marked with the year “1607”, this mortar is heavy at more than 5 kg and would have been a hard-wearing object able to withstand years of use. maker: Unknown maker Place made: England, United Kingdom