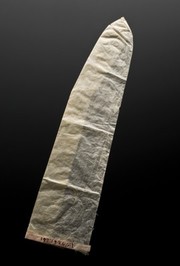 This condom is made of animal gut membrane, known as caecal. Condoms prevent semen entering the vagina. They are a barrier contraceptive. Animal membrane has been used to make condoms for hundreds of years. Condoms made from lamb intestines are still available. However, most condoms are made from latex or polyurethane. Caecal condoms were effective against pregnancy because animal membrane is porous to viruses. They do not reliably protect against sexually transmitted infections such as AIDS. This example was made by chemists John Bell and Croyden Limited. maker: John Bell and Croyden Limited Place made: London, Greater London, England, United Kingdom