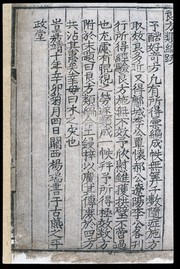 Liangfang leibian is a remedy compilation drawing on three separate texts: 1) Xinkan jingyan mifang (Tried and Tested Secret Precriptions, Newly Engraved), compiled by Li Tanhuai and Hao Liaoyang in the Ming period (1368-1644) (28 remedies with an index showing the sapors of the drugs in each one); 2) Fangwai qifang (Egregious Prescriptions), anonymous (23 remedies with detailed notes on preparation and administration); 3) Jingyan yaofang (Tried and Tested Medical Prescriptions), compiled by Li Wenmin in the Ming period.

Most of the prescriptions included in the book are single-ingredient empirical remedies. In the appendix, Yang Ruiji has added seven magical remedies and five elixirs of his own.