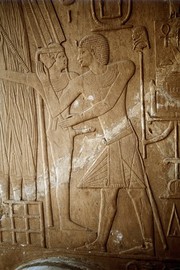 Min, Egyptian god of fertility. This wall relief is from Karnak, near Luxor which was known in Ancient Egypt as Ipet-isut 'the most select of places'. The temples of Karnak were built, enlarged, demolished, re-built and restored for over 2000 years after the Theban kings and the god Amun came to prominence at the beginning of the Middle Kingdom (2040-1782 BCE). Karnak was particularly active from the beginning of Dynasty XVIII (1570-1293 BCE) when the capital of Egypt was established as Thebes. Photograph taken in 1989.