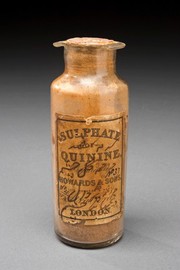 Free to use with attribution Attribution 4.0 International (CC BY 4.0)Credit: Science Museum, London Can I use this?

The glass bottle originally contained quinine sulphate, a treatment for and a preventative measure against malaria. The bottle was reused at a later date and now contains an unidentified drug. This probably was the fate of many of the quinine bottles produced. This bottle was probably reused in the Middle East or South East Asia, as indicated by the script on the label. maker: Howards & Sons, maker: Unknown maker Place made: London, Greater London, England, United Kingdom