The discovery of the tomb of King Arthur. Stipple engraving by J. Ogborne after J.H. Mortimer. 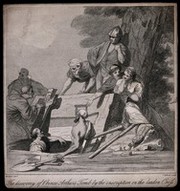 Two men are digging in the grave, two monks are trying to decipher the inscription on the cross while young spectators are looking on. "Prince Arthur" should refer to Arthur Prince of Wales (1486-1502), the eldest son of King Henry VII. However, his grave was in a chantry in Worcester Cathedral, whereas the present print shows an outdoor scene. The present scene shows the discovery of the tomb of King Arthur and Queen Guinevere at Glastonbury as described in two accounts by Giraldus Cambrensis (Gerald of Wales, 1146-1223), once in his Liber de principis instructione and again in his Speculum ecclesiae , chapter VIII, as taking place "in our own times"

The discovery of Prince Arthur's tomb by the inscription on the leaden cross. Mortimer pinxt. J. Ogborne sculp.

The discovery of the tomb of King Arthur. Stipple engraving by J. Ogborne after J.H. Mortimer. Credit: Wellcome Collection. CC BY