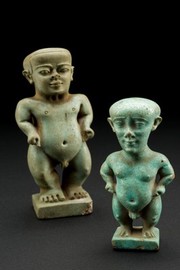 Many people still believe that amulets have magical or spiritual powers, bringing good luck and good health while providing protection from sickness and harm. Ptah-Seker was originally two separate deities, Ptah (the divine creator) and Seker, a god associated with the dead and funerals. Seker was originally shown as a mummified man with the head of a falcon. Ptah-Seker was a god associated with the dead and funerals and this amulet may have been buried with the body. Both of the amulets (A608668 and A608669) are made from a type of glazed ceramic called faience. maker: Unknown maker Place made: Egypt