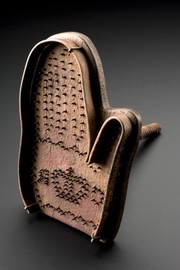 Branding tools were sometimes used to permanently stamp or tattoo army deserters or criminals. This hand-shaped example was made by the British Army during the English Civil War (1641-1651). The branding tool bears the initials ‘CR’ surrounding a crown. This is presumed to refer to ‘Carolus Rex’ - King Charles I. He was beheaded in 1649 for treason, after which England briefly became a republic after a decade of civil war. This tool would have been used to mark ‘ownership’ of Royalist army deserters. The metal spikes on the hand are blunt. Perhaps they are dulled through use or perhaps it is deliberate to inflict more pain. However, they were likely heated first to burn the imprint in. Branding was abolished in 1829 with the exception of army deserters. The mark was then tattooed on the body, not branded with irons. The practice was totally abandoned in 1879. production details: British Army Place made: England, United Kingdom