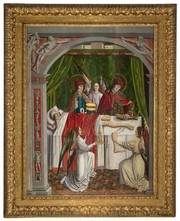 A verger's dream: Saints Cosmas and Damian performing a miraculous cure by transplantation of a leg. Oil painting attributed to the Master of Los Balbases, ca. 1495. Saints Cosmas and Damian practised medicine and surgery without payment according to their legend, and were therefore represented to the lay public as medical ideals. In this Spanish altarpiece they are shown in the full finery of academic doctors as they perform their miraculous operation. The painter shows only one bone running through the limb below the knee-joint, whereas empirical research reveals that there are two, the tibia and fibula. This not uncommon fallacy may be derived from the fact that in classical antiquity the same word (tibia) was used for both the larger bone in the leg and for the leg as a whole. The episode is described by Jacobus de Voragine, Legenda aurea, 1275, translated into English by William Caxton, 1483, vol. 5, edited by F.S. Ellis, Temple Classics 1900, as follows: "Felix, the eighth pope after S. Gregory, did do make a noble church at Rome of the saints Cosmo and Damian, and there was a man which served devoutly the holy martyrs in that church, who a canker had consumed all his thigh. And as he slept, the holy martyrs Cosmo and Damian, appeared to him their devout servant, bringing with them an instrument and ointment of whom that one said to that other: Where shall we have flesh when we have cut away the rotten flesh to fill the void place? Then that other said to him: There is an Ethiopian that this day is buried in the churchyard of S. Peter ad Vincula, which is yet fresh, let us bear this thither, and take we out of that morian's flesh and fill this place withal. And so they fetched the thigh of the sick man and so changed that one for that other. And when the sick man awoke and felt no pain, he put forth his hand and felt his leg without hurt, and then took a candle, and saw well that it was not his thigh, but that it was another. And when he was well come to himself, he sprang out of his bed for joy, and recounted to all the people how it was happed to him, and that which he had seen in his sleep, and how he was healed. And they sent hastily to the tomb of the dead man, and found the thigh of him cut off, and that other thigh in the tomb instead of his. Then let us pray unto these holy martyrs to be our succour and help in all our hurts, blechures and sores, and that by their merits after this life we may come to everlasting bliss in heaven. Amen."