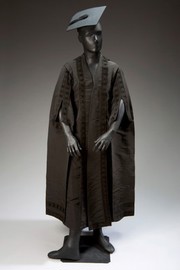 An MD is the degree given to a student of medicine. It is a formal qualification gained through an accredited university. Such formal qualifications in medicine became popular during the 1800s. Previously, many ‘doctors’ had had little or no formal training. This gown, hood and mortar board belonged to British physician Dr Arthur Templer Davies (1858-1929). This type of ceremonial dress is not dissimilar to those worn today, but was worn at a graduation ceremony for medical students around 1890. The colour of the robes and hood denote the university and what degree the student is receiving. The gown, hood and mortar board were made by Ede, Son and Ravenscroft, ceremonial dressmakers since 1689. Upon graduation from medical school in the late 1800s, newly qualified doctors took the Hippocratic Oath. The oath was a guideline for the medical profession. It is not compulsory now, although many doctors still uphold this ancient tradition. maker: Ede, Son and Ravenscroft Place made: London, Greater London, England, United Kingdom