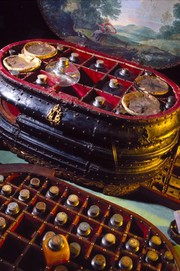 This magnificent and unique medicine chest was made for Vincenzo Giustiniani (d. 1570), the last Genoese governor of the island of Chios in the eastern Aegean Sea. He ruled Chios from 1562 until the Turks expelled the Genoese in 1566 after an occupation of some two hundred years. On a box from the middle drawer is painted the symbol of Chios – a black eagle above a three-towered castle. The chest contains 126 bottles and pots for drugs, some of which still have their original contents. These include rhubarb powder, ointment for worms, juniper water and mustard oil. The chest measures nearly a metre long. The painting on the inside of the lid is a later addition. It remained in the Giustiniani family until it was bought by Henry Wellcome in 1924.