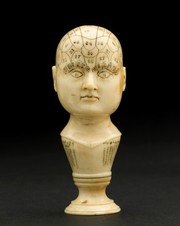 The skull of this ivory phrenological head has been marked off into sections and used for phrenological consultations. Phrenologists believed that the shape and size of various areas of the brain (and therefore the overlying skull) determined personality. Phrenological heads were used as reference guides for people carrying out consultations. Although phrenology became popular with large numbers of people in the 1800s, it soon became controversial within medical circles and was eventually dismissed as quackery.