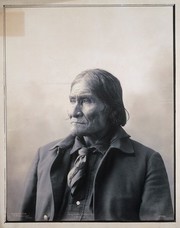 Geronimo (Guiyatle) 1829-1909, a chief of the Chiricahua Apache tribe of North American Indians. Half length to left. One of the most successful Indian chiefs in leading resistance to the 'white man', Geronimo led raids across the southwestern states and into Mexico. In 1886, he was captured and exiled to Florida. Later he was released and became a national celebrity