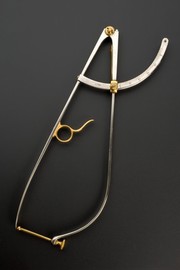 Belgian obstetrician Jean Baptist Van Huevel (1802-1883) designed this pelvimeter. It was made by instrument maker Collin of Paris. A pelvimeter measured the pelvic diameters of pregnant women. The opening of the handles allowed measurements to be read off a sliding scale. This was part of a scientific attempt to identify those women most likely to experience obstructed labour. The technique was known as pelvimetry. It was developed during the late 1700s by Frenchman Jean Louis Baudelocque (1746-1810). This pelvimeter was originally part of an instrument collection belonging to amalgamated French companies Charrière, Collin and Gentile. It was sold in 1978. maker: Collin Place made: Paris, Ville de Paris, Île-de-France, France