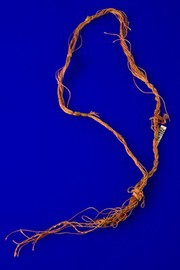 Medical treatment based on belief and superstition – customs that often went back generations – continued to be practised in the 1800s and 1900s despite the growing influence of biomedicine. This thread necklace was used to prevent nosebleeds in children and adults. As well as being annoying for a person, sudden nosebleeds were considered to be bad luck. The knotted thread was purchased in 1930 from Edward Lovett’s (1852-1933) collection of amulets and charms. Lovett was interested in folk remedies nearly all his life and began collecting from the age of eight. maker: Unknown maker Place made: Middle East