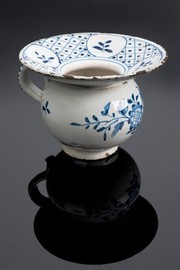 Spitting was a common and socially acceptable habit during the 1600s and 1700s. Spittoons were used as containers for spit and could be found inside many public places, such as inns and pubs, as well as private homes. From the late 1800s, the practice was discouraged as it was realised that spit contained germs that could spread diseases including tuberculosis, one of the biggest killers of the time. maker: Unknown maker Place made: England, United Kingdom