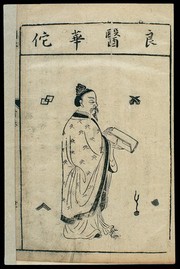 One of a series of woodcuts of illustrious physicians and legendary founders of Chinese medicine from an edition of Bencao mengquan (Introduction to the Pharmacopoeia), engraved in the Wanli reign period of the Ming dynasty (1573-1620) -- Volume preface, 'Lidai mingyi hua xingshi' (Portraits and names of famous doctors through history). The images are attributed to a Tang (618-907) creator, Gan Bozong. The account in 'Portraits and Names of Famous Doctors through History' states: Hua Tuo was a famous physician of the Three Kingdoms period (220-280). According to Weizhi (the Wei records), Madam Gan Lingfu, when six months pregnant, suffered constant abdominal pain. On feeling her pulses, Hua Tuo pronounced the foetus dead. He prescribed her some medicine which caused the foetus to be expelled, after which she recovered. On another occasion, Hua Tuo was summoned to attend a patient who had been suffering from acute abdominal pain for about a fortnight and was losing his hair. Hua Tuo said that the patient's spleen was partially decayed, but that this could be treated with surgery. He gave the patient an anaesthetic draught, then laid him down and made an incision in his abdomen without his feeling any pain. Seeing that the patient's spleen was indeed decayed, he cut out the necrotized portion, applied an ointment, and sutured the incision with thread. Some few days later, the patient recovered. Prince Cao Cao, founder of the Wei dynasty, heard of Hua Tuo's prodigious medical skills and kept him in constant attendance. Once, Cao Cao complained of a headache, and Hua Tuo cured this immediately with acupuncture in the diaphragm region.