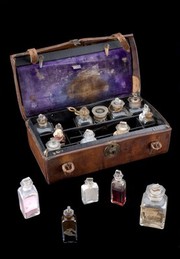 Free to use with attribution Attribution 4.0 International (CC BY 4.0)Credit: Science Museum, London Can I use this?

David Livingstone (1813-1873) was a Scottish missionary and explorer in Africa. He used this medicine chest on his last journey to find the source of the Nile, beginning in 1866 until his death. He began by collecting men and supplies in India before travelling to Malawi, Africa. It was on this trip that his whereabouts became unknown until greeted by the explorer H M Stanley (1841-1904) with the now famous words “Doctor Livingstone, I presume?” The chest contains seventeen glass bottles, with their original contents, a lancet, a plaster, a brass weight and a caustic pencil. Some of the bottles are labelled “Treacher of Bombay and Poona”, a druggist located in Bombay. Concentrated liquid ammonia purchased from Treacher was used to treat snake bites. maker: Unknown maker Place made: Europe, India