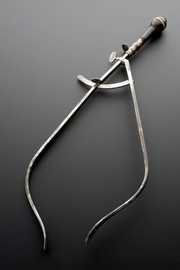 French instrument maker Sirhenry of Paris made this early pelvimeter. It measured the pelvic diameters of pregnant women. The opening of the handles allowed measurements to be read off a sliding scale. This was part of a scientific attempt to identify those women most likely to experience obstructed labour. The technique was called pelvimetry. It was developed during the late 1700s by Frenchman Jean Louis Baudelocque (1746-1810). maker: Sirhenry Place made: Paris, Ville de Paris, Île-de-France, France