The Crick papers, the Triplet code, 1961 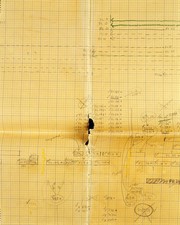 The Crick papers - Triplet Code - 1961 Francis Crick, Sydney Brenner and colleagues discover that the genetic code is a triplet code. Following the initial series of experiments on the triplet code, work continued to provide a more comprehensive genetic map of the rII B cistron of bacteriophage T4 (published in 1967). This genetic map, a 27”x57” sheet of graph paper, is a working draft for this more comprehensive mapping exercise. Document photographed before conservation. What was the relationship between the sequence of bases in DNA or RNA and the sequence of amino acids in proteins? This question – the genetic code – was the subject of a collaboration between Francis Crick, Sydney Brenner, Leslie Barnett and Watts-Tobin that began in the late 1950s. They concluded that the genetic code is a triplet code (three bases code for one amino-acid), and that the code is degenerate (an amino-acid may be coded by more than one triplet of bases).