Joseph Nollekens arranges a bust of William Wyndham Grenville, Baron Grenville, between busts of William Pitt the younger and Charles James Fox, in a display of sculptures. Etching by J. Sayers, 1808. 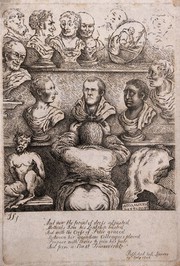 The titlepage to Sayers's pamphlet (op. cit.) includes the note '"We understand that Mr Nollekens is now employed in modelling a bust of Lord Grenville, as a companion to those of Mr. Pitt and Mr. Fox." Daily Papers'. "This identifies 'Lord G******le' as William Wyndham Grenville, baron Grenville (1759-1834), of whom Nollekens did indeed complete a marble bust in 1810 (now in the Royal Collection). Grenville had served as Foreign Secretary under his cousin William Pitt, and had been a supporter of Catholic emancipation. He afterwards made an alliance with C.J. Fox and in 1806-7 led the 'ministry of all the talents'. "–Royal Academy online catalogue The bust of Grenville wears a rosary and "the cross of Peter" round its neck because Grenville had argued the cause of Catholic emancipation with King George III, in vain. Pitt, a Tory, together with some of the other busts, looks at the arrival of Grenville, a Whig, with surprise. Fox (like Grenville a Whig) seems content: he is shown as dark-skinned ("Fox had dark, swarthy features"--Oxford dictionary of national biography). Left and right, two ancient sculptures from Nollekens's collection, one of a faun and the other of a torso

And now the point of dress adjusted / Methinks I see his Lordship busted / And with the cross of Peter graced / Between his quondam colleagues placed / Propose with theirs to join his pate / And form a bust triumvirate. JSf

Joseph Nollekens arranges a bust of William Wyndham Grenville, Baron Grenville, between busts of William Pitt the younger and Charles James Fox, in a display of sculptures. Etching by J. Sayers, 1808. Credit: Wellcome Collection. CC BY