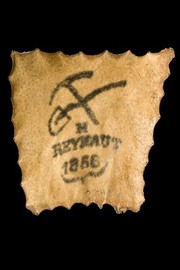 Tattooed onto human skin is the symbol of a crossed spade and pickaxe. It bears the inscription ‘H REYNAUT 1866’. This may have been the name of a loved one or perhaps the owner of the tattoo. The symbolism of the crossed spade and pickaxe was later used in association with communism, but also appears on crests and army uniforms as a mark of distinction. The skin was once owned by Parisian surgeon Dr Villette. He worked in military hospitals and collected and preserved hundreds of samples from the bodies of dead French soldiers. In the late 1800s, tattoos were often seen as markers of criminal tendencies or ‘primitiveness’. Medical men tried to interpret common images and symbols. Tattoos were also a tool for identification, a practice that continues today. This tattoo is one of a large group bought for Henry Wellcome’s medical collection by one of his agents, Captain Johnston-Saint. maker: Unknown maker Place made: France