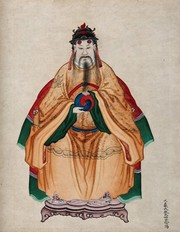 Fu Hsi (ca. 4,000 BC) is the father of the Chinese Tai Chi Philosophy of yin and yang and thus the I Ching. His theory was based on a system of eight 'Trigrams' (patterns of lines based on the yin-yang symbols, which together represent stages in the continuous process of change, and the connections between past, present and future) The 'Yin-yang' symbol represents the perfect balance between the interaction of opposites in the universe, and is central to the principles of Chinese medicine