An alchemist's laboratory: a young man drinks an elixir of life while the alchemist is incapacitated. Wood engraving by H.K. Browne (Phiz), 1865. 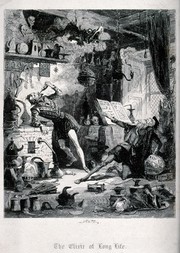 Credit: An alchemist's laboratory: a young man drinks an elixir of life while the alchemist is incapacitated. Wood engraving by H.K. Browne (Phiz), 1865. Credit: Wellcome Collection. Attribution 4.0 International (CC BY 4.0)

An episode in the prologue of the novel, set in London in the year 1599. The man on the right is Reginald Darcy, who has assumed the name of Dr Lamb for his persona as a wizard and alchemist. Dr Lamb has a seizure as he is about to drink a potion which he believes to be the elixir of life. On the left, his grandson Auriol Darcy drinks the potion instead. Dr Lamb is believed to be dead (though he reappears alive in the last chapter of the book), while Auriol acquires longevity, next appearing in 1830 The laboratory is described by Ainsworth as follows: "The floor was covered with the implements used by the adept—bolt-heads, crucibles, cucurbites, and retorts, scattered about without any attempt at arrangement. In one corner was a large terrestrial sphere: near it was an astrolabe, and near that a heap of disused glass vessels. On the other side lay a black, mysterious-looking book, fastened with brazen clasps. Around it were a ram’s horn, a pair of forceps, a roll of parchment, a pestle and mortar, and a large plate of copper, graven with the mysterious symbols of the Isaical table. Near this was the leathern bag containing the two decapitated heads, one of which had burst forth. On a table at the farther end of the room, stood a large open volume, with parchment leaves, covered with cabalistical characters, referring to the names of spirits. Near it were two parchment scrolls, written in letters, respectively denominated by the Chaldaic sages, "the Malachim," and "the Passing of the River." One of these scrolls was kept in its place by a skull. An ancient and grotesque-looking brass lamp, with two snake-headed burners, lighted the room. From the ceiling depended a huge scaly sea-monster, with outspread fins, open jaws garnished with tremendous teeth, and great goggling eyes. Near it hung a celestial sphere. The chimney-piece, which was curiously carved, and projected far into the room, was laden with various implements of hermetic science. Above it were hung dried bats and flitter-mice, interspersed with the skulls of birds and apes. Attached to the chimney-piece was a horary, sculptured in stone, near which hung a large starfish. The fireplace was occupied by the furnace, on which, as has been stated, was placed an alembic, communicating by means of a long serpentine pipe with a receiver. Within the room were two skeletons, one of which, placed behind a curtain in the deep embrasure of the window, where its polished bones glistened in the white moonlight, had a horrible effect. The other enjoyed more comfortable quarters near the chimney, its fleshless feet dangling down in the smoke arising from the furnace."--Ainsworth, op. cit., prologue Ainsworth's description of Dr Lamb about to drink the potion: "he [Auriol Darcy] beheld Doctor Lamb pouring the contents of the matrass—a bright, transparent liquid—into a small phial. Having carefully secured the bottle with a glass stopper, the old man held it towards the light, and gazed at it with rapture. "At length," he exclaimed aloud—"at length, the great work is achieved. With the birth of the century now expiring I first saw light, and the draught I hold in my hand shall enable me to see the opening of centuries and centuries to come. Composed of the lunar stones, the solar stones, and the mercurial stones—prepared according to the instructions of the Rabbi Ben Lucca—namely, by the separation of the pure from the impure, the volatilisation of the fixed, and the fixing of the volatile—this elixir shall renew my youth, like that of the eagle, and give me length of days greater than any patriarch ever enjoyed." While thus speaking, he held up the sparkling liquid, and gazed at it like a Persian worshipping the sun. "To live for ever!" he cried, after a pause—"to escape the jaws of death just when they are opening to devour me!—to be free from all accidents!—’tis a glorious thought! Ha! I bethink me, the rabbi said there was one peril against which the elixir could not guard me—one vulnerable point, by which, like the heel of Achilles, death might reach me! What is it!—where can it lie?"And he relapsed into deep thought. "This uncertainty will poison all my happiness," he continued; "I shall live in constant dread, as of an invisible enemy. But no matter! Perpetual life!—perpetual youth!—what more need be desired?" (ibid.)

The elixir of life. Phiz.